What is it and what are the plans?

Rather than just show you the project up front and ask for support immediately, I thought I would first show you some background on why Manning has completed so many amazing projects over the last 100 years, and how much can be accomplished when the whole community gets together to pitch in and help.

So please carefully follow through the various links and read the information.
As you scroll down on the left side you'll eventually get to see exactly what the Hillside Splash project is all about.

e-mail Dave Kusel with questions about this project
If I can't answer your questions I'll make sure to get you in contact with a committee member who can...

I also hope that former residents of Manning and alumni will consider supporting this project.
The Manning community provided you the building blocks (both mentally & physically) while growing up and also gave you the wonderful education you needed to succeed in life elsewhere.
I realize you now live in other communities and probably support projects there, but you got your beginnings here and when you return to Manning to visit, your family will be able to enjoy the wonderful recreational facilities.
More than likely you will still have some relatives living here which will help them with their quality of life, too. 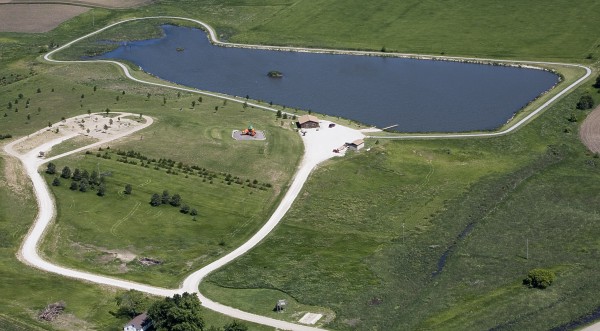 View today
Early history of the swimming hole and pools
Swim suits could be rented at Radeleff's pond in south Manning before 1900, and also at the Great Western Park, a popular summer resort. Another popular place was the Canary Island area of the Nishnabotna River just north of the Milwaukee trestle - on the west side of the old Great Western RR right-of-way. It was an oxbow that was cut off when the Great Western RR Company straightened the creek which then created an island of sorts. Today, a part of the Ag Processing soybean plant property, it was purchased by Ivan Opperman in 1970 and the oxbow was bulldozed in and land tiled for farming purposes. The name "canary" came from the large numbers of Gold Finches that frequented this area.

Other sources of swimming fun in the area were the creeks and farm ponds so occasional infections and fevers occurred.

In 1925, a movement began to build a municipal swimming pool in Manning. The first proposal was a 120 by 60 foot oval pool to be located in the city park. The Manning Chamber of Commerce and American Legion announced plans for the pool in March 19, 1925, noting that it would include a sanitary filtering system and that the high grade concrete pool could be used for ice skating in the winter.

Plans were to take advantage of the W.P.A. (Works Progress Administration) which would provide federal funds and a W.P.A. labor force.

On November 16, 1936, the issue was brought before the Manning voters, and passed by a four to one margin. Representatives were sent to inspect various pools and to get an idea of the costs involved but the movement died a quiet death.

Another 20 years passed and Manning's mayor Joe Loucks was determined to get things accomplished when the city council received a petition signed by 273 residents requesting a vote on a pool. The petition was presented July 5, 1956, requesting an expenditure of $50,000. The council appointed attorney Richard Crandall to investigate various sites and gain options, if possible, for the location of a pool. An option was secured from Gerhardt Voge at the present site and on August 9, 1956, Manning voters endorsed the construction of a pool by a three to one margin. Eight hundred and eighty-eight votes were cast, 656 yes, 217 no, 15 spoiled ballots. Youngsters did their share to help promote the cause on the day of election by parading through town in their swim suits shouting, "We want a pool!"

Bonds were sold March, 1957 for a term of 20 years at 3.41 percent interest. Contract was let in April to Haubrich Construction of Mapleton and the pool was opened on May 1958.

Gene Rostermundt was the first manager, Ray Fink, assistant manager, and lifeguards were Carl Saunders and Karen Rix, all of whom had their Red Cross lifesaving certificates.

The first pool Board appointed by the council was Denver Haase, chairman, and Dr. Robert R. Dappen and Art Rix.

Swim team competition began with Manning perennially being one of the powerhouses in the Western Iowa Swim Conference.

In 1973, when the new high school was opened for use, the old gym on the southwest corner of the Center Street and Highway 141 intersection seemed to emerge as a place for Community Recreational activities. In 1974-1975, the Jaycees opened the gym on weekends for children and in return they were allowed to use the gym one night a week.

In 1977, the idea of turning the old gym into a Recreation Center came up. A committee was formed as the city and school entered a temporary agreement on a trial basis to see if such an idea was feasible. The volunteer help became vital to keeping the center open during its numerous hours.

In March of 1982, the city purchased the old high school grounds. In 1983 the renovations began. The old boys' and girls' shower rooms, maintenance room, boiler room and shop area were all gutted and made into the men's and women's locker rooms, meeting room, whirlpool area and office area. In 1984 the new racquetball court was added next to the weight room on the northwest side of the basement.

In May of 1989, after months of debates, plans, meetings, an indoor/outdoor pool was built. Years earlier, a charitable contribution of $50,000 from the L.R. Nelson Trust Fund was earmarked for a new swimming pool in Manning and by 1989, through accrued interest, the fund was nearly $100,000.

These amazing historical pictures were sent to me by a member of the Radeleff family in California so I could scan them and add them to the Manning historical database.

Do you know what/why these men are doing?
Today, you can go to your refrigerator or freezer and get a cold or frozen item. Back during this time most people had what was called an ice box.
So during the winter, ice had to be cut from the Radeleff pond (shown above), then hauled to an ice house where it was packed with straw to keep year-around.


Henry D. RADELEFF moved to Manning in the spring of 1885, when he started a nursery. His grounds were located just south of town and his trade was principally local and to nearby families of surrounding towns. In connection with the nursery he had an artificial fish pond which he stocked with Carp and keeps them for his own use.
The pond was fed from a well with a windmill pump and was used as a bathing resort, as he kept bathing suits for rent and had bath houses for the accommodation of patrons. In the winter, he flooded the pond and stored the ice for summer trade. He also had a sand bank from which he sold sand.

In the distance is the first location of the Milwaukee RR and the 1000+ feet viaduct
this bridge crossed over the Great Western and North Western Tracks - close to where Highway 141 is located today.

Lou Ohm and Bob Radeleff on the seat, heading out to deliver ice.

The Frahm tavern (Horseshoe bar) where Deb's Corner Cafe is now. The large Frahm ice house can be seen in the back, and behind that would have been Hoffmann Lumber Company.

To give you a better perspective of the location of the original Milwaukee RR mentioned above, here are some more pictures.
One of them came from the grandchildren of Pastor John Ansorge. He was the Lutheran pastor in Manning from the early 1900s for 50 years. He was also an amateur photographer and took the picture of the bridge workers shown below.
The grandchildren no longer wanted a number of these old Manning pictures but also did not want to throw them away so I found out and got them to scan.

The blue arrow shows the location of the water tower

Workers on the bridge - photo by John Ansorge

Again, the main reason why I have these amazing pictures is because other people who want their own family and our community history preserved, sent those things to me to scan.
I know there are more amazing pictures out there yet to be found.
Won't you dig through your closet and attic now to find them and then get them to me to scan?