In Loving Memory of Darwin Dammann

Darwin Charles, son of Walter and Malinda (Otto) Dammann, was born August 10, 1961, in Carroll, Iowa. He grew up south of Manning in Audubon County and graduated from Manning High School in 1979. After graduation, Darwin began farming and, starting in about 1990, he also began trucking.

In the early 1980s, Darwin was united in marriage with Darcy Lohrmann and two sons were born to this marriage. The couple divorced in the early 2000s. It was about this time that he gave up farming and turned to trucking full time.

Darwin met Liz Richards in late 2009, and they made their home in Avoca. Together they expanded his trucking business, Double D Express. On July 11, 2015, Darwin joined Liz in marriage.

Darwin was a hard worker. He enjoyed driving truck, long phone conversations with fellow truckers, fishing with his grandchildren, yard work, and above all, spending time with his family and grandchildren. 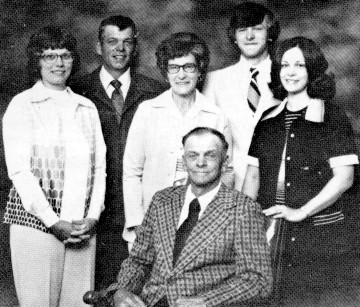 Malinda and Walter Dammann and their children: Diane, Daryl, Darwin, and Darlis

WALTER DAMMANN FAMILY
Walter Dammann, son of William and Dora (Fischer) Dammann, was born April 23, 1915, in Audubon County. He was married January 22, 1946, to Malinda Otto, who was born May 10, 1923, to Carl and Tena (Hass) Otto of the Aspinwall vicinity.

They have four children.

Daryl was born September 26, 1946. He graduated from Manning High School in 1964, served two years in the Armed Service, and was married in 1968 to Deanna Winther of Kimballton. They live on an acreage northwest of Aspinwall and he is a carpenter. They have three children, Gaylene, 12; Dwight, eight; and Darren, four.

Diane was married to Larry Cross of Des Moines May 24, 1970. They are parents of two daughters, Tina, 10, and Renee, nine. They now reside on an acreage near Waukee, Iowa.

Darlis was married to Rex Wambold of Afton, Iowa January 9, 1971. They have two sons, Jason, five, and Ryan, three. They now live on an acreage near Van Meter.

I originally had 2 other pictures in this tribute but did not realize there are 2 different Diane Dammanns, one MHS 1963 and the other Diane Dammann MHS 1966 in Darwin's family.
Thanks to Sharon (Grimm), for catching this error and e-mailing me so I could correct the errors.

Anyone who notices errors on my web pages will hopefully contact me so I can correct things.
I don't want these errors to continue in my Manning database.