A descendant of Frederic Schroeder contacted me by e-mail in 2017 and has been working with me on Fred's military service.

She had some pictures and other information she sent me and now an amazing event has occurred in South Dakota, where they are naming bridges in honor of Veterans who were KIA during war.

Now most people won't know this but this Schroeder family has its roots in the Manning/Aspinwall area, so I always like to include individuals and families who moved away as part of Manning's history.

I'm also going to repeat what I've been stating in various features on my web pages and explain to people when I visit with them about Manning, that one of the BIG reasons why so many individuals/families came to and stayed or traveled through Manning is because of the 3 railroads with passenger and other services from 1880 through the late 1930s.
While most towns had 1 railroad, very few had 3 different rail systems which put Manning on the map and in turn also created so many connections around the U.S., so Manning is very unique from my perspective and bias!!!

Those other communities can lay claim to the individuals/families who moved from Manning, but Manning had them previously, so they are part of both community's histories.

Here is some of the information I have for Frederic and at the bottom of his feature is the recent bridge dedication information.
All of this information will be a tremendous addition to the Manning Veterans' history book.

I'm so grateful to the Schroeder descendant, for if she had NOT contacted me and shared what she has, I would not have known about Fred and his family's connection to Manning and they would not have been archived in the Manning Historical Database I'm working on, or Fred included in the Veterans book.

So my PLEAS again to any/everyone who is a Manning connected Veteran or the family of a deceased Veteran who was connected to Manning to contact me ASAP, so we can work on your information to include in the book and the database. 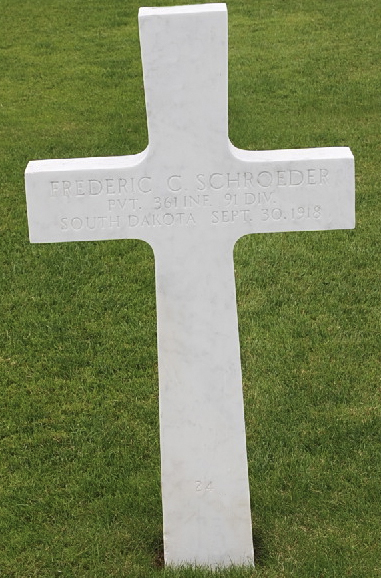 Son of Henry & Anna (Schröder) Schroeder - they lived in the Manning/area and retired in Egan, South Dakota, in 1918. The Schroeders were the parents of nine children. They are Herman and August of Flandreau; Louie, Henry and Mrs. Irving (Emma) Stombaugh, Egan; Mrs. John (Augusta) Vinke, Mrs. Herman (Alfrieda) Jahn, and Johannes of Manning, Iowa. One son, Frederic, gave his life during the first World War.
The American Legion Post 97 in Egan, South Dakota, is named in honor of Private Frederic C. Schroeder.

If you are a Veteran or family member of a Veteran and have "letters written home" please also send them with pictures and information to me for the Manning Veterans' history book project.

Fred Schroeder Killed In Action
Egan Boy Gives Life For Old Glory - Killed in Action in France September 30th.
Just as we are about to go to press the sad news reached here, in the form of a telegram, to the effect that Fred Schroeder, son of Mr. and Mrs. Henry Schroeder of this city had died in action "Somewhere in France."
The telegram says in part: Washington, D.C. November 20, 1918
Mr. Henry Schroeder, Egan, South Dakota
Deeply regret to inform you that Private Frederic Schroeder is officially reported killed in action September Thirtieth.
Adjutant General Harris

Horrors Of War Again Brought Home to Egan
Frederic Carl Schroder Sacrificed His Life in Flanders' Field For the Honor of Old Glory, His country and His Loved Ones.
Gave His All For Democracy.
The news of the death of Fred Schroeder came over the wire Thursday as a shock barbed with pain and sorrow. Only a few short months ago, he answered the call of his country to go "over there" and uphold the honor of Old Glory, and fight the fight of right against might. We imagine now as we pen these few words in his memory, that we see him as he left with the boys on May 25th for Camp Lewis; we fancy we hear his parting goodbye and see his face as he solemnly said, "I'm going to give them the best I have in me," and he did - he gave them his all - sacrificed his life for the sake of humanity. His untimely death has brought the bitter cup of sorrow to the lips of friends and relatives. His was a heart of gold. He was one of nature's noblemen in its truest sense - brave, generous, manly. His was a soul of honor, and his friends and friendship were sacred to him.

There was a daily beauty about this life which won every heart. In temperament he was mild, conciliatory, and candid; and yet remarkable for an uncompromising firmness. He gained confidence when he seemed least to seek it. His future was full of promise and we dare not ask why he was taken from us in his prime, unless, as flowers are picked before the frost finds them that we may not witness their decay. Tis sad indeed to see one taken so unexpectedly, yet his was a noble death - sacrificing his life for his country and his flag - a hero in every sense - doing his duty to the last. As for him there was no standing on the borderland, gazing into the unknown for death came as the sunset dies along the hills when the day is over. A life that imparts such lessons is well worth living.

"But now he sleeps where the daisies nod,
And the clover hangs its head,
Where the wild birds come and the wild bees hum,
Above his lonely bed.
He fought the fights, he kept the faith,
His name shines bright and clear,
And his memory lives in all our hearts,
Which will hold it ever dear.

Frederic Carl Schroeder was born November 23, 1895, in Hayes Township, Crawford County, Iowa. He was a member of the Lutheran Church from childhood. He attended country school in Iowa Township, and later moved with his parents to Manning, where he attended school for two years. In 1914 he and his brothers came to Egan and located on a farm near here, and he in partnership with his brother, Henry, farmed successfully for three years. In 1917 they moved to Egan and purchased the McWilliams hardware stock and later the Ehler's brick business block and by their courteous treatment and fair dealing they have built up one of the best businesses in this part of the state.

In 1910, Henry and Anna retired from farming and moved to Manning, then in 1917 they moved to Egan so they could be closer to the rest of their family.

On the 25th of May Frederic answered the call of his country and went with the Moody County contingent to Camp Lewis and later to Camp Merritt and from there he was sent to France where he lost his life in action on September 30th.

He leaves to mourn his death his parents, Heinrich Frederick and Anna C. (Schröder) Schroeder, who reside here; five brothers, Herman, Henry, August, and Louie of Egan, and Johannes of Manning, Iowa; three sisters, Mrs. Augusta Vinke of Manning, Iowa, Mrs. Alfrieda Jahn of Manilla, Iowa, and Miss Emma Schroeder of this city, besides a wide circle of friends who extend their heartfelt sympathy to the bereaved relatives.

Frederic is the Jayne's great-uncle